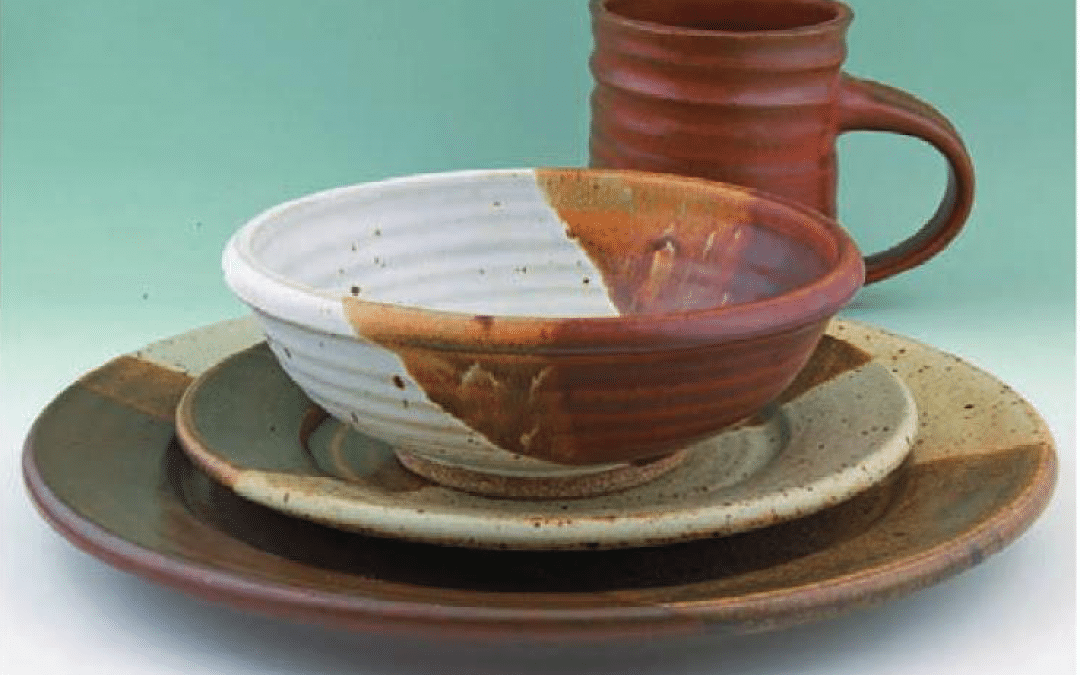 A complete set of dinner plates, lunch plates, cups, bowls, pitchers, and other forms is enticing for prospective customers. In many instances, customers do not intend to buy sets until they see the display. When customers are faced with grouping individual pots to form a set, they may be overwhelmed and, instead, will purchase nothing at all. Making the buying decision easy by creating and displaying sets various glaze colors, sizes, and details. 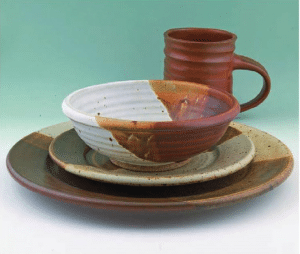 What Is A Set?
A set can consist of any number of pottery forms. To create a set, choose the defining characteristics of the group.With all the bowls be the same size, shape, or glaze color? Will all pieces have the same surface design elements and clay body color?

The next question is how many pieces comprise a set. A set should be apparent to others when in use or on display. Simply put, when customers inter a potter display booth or visit a studio, they should recognize without question that a designated group of pottery objects a set.

An important but simple rule to consider is that func­tional objects need to function. Bowls should hold liquids and solids, stack easily in the cupboard, be easily cleaned , and generally fit into the kitchen workspace. A pitcher should pour liquid without dribbling down its spout. The lids of covered jars should fit properly. Before creating sets, make several prototype pieces and use them in your own kitchen for a trial run. Tweak your design, if necessary, then begin creating the sets.

Sets should have a common design element that unifies them visually and/or suucturally. All of the pieces don’t have to be exactly alike, but they should be similar on some leveL Just as human beings are unique, handmade pottery sets should reflect that intrinsic aspect of their production. 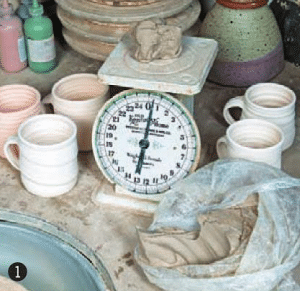 CREATING A SET
Usually, the rust few pots in a set arc “stiff” and self­ conscious in form, while succeeding pots becoming more Buid and confident in structure. After several kiln loads or production cycles, you’ll begin to make improved editions of individual pieces within the set.

1. Weigh out a fixed amount of clay for each pot in the set.This ensures a degree of uniformity in all pots. For instance, if you weigh out four 1-pound (454-g) pieces of clay, you will throw four coffee cups close in size. Apply the same weighing technique to hand building to duplicate the scale of an object. This is your first step toward standardizing the clay form.
Also, each piece of clay should contain the same moisture content to achieve consistency in the form­ing process. The main idea in producing sets is to eliminate as many variables as possible, so you can concentrate on making each piece similar.

2. Think functional. While some degree of random qualities or handmade features are a definite promo­tional point in functional pottery, selling items to the public requires a number of basic constraints as to the size and shape of the pottery. For example, it would not improve the selling qualities of plates if they could not fit into a standard dishwasher or kitchen cabinet. Likewise, dinner plates with deep recessed throwing ridges may appear attractive, but plates without a surface on which to cut food are not functional. The general public is interested in handmade products, bur they don’t want to spend extra time washing or alter the way they would typically use a plate to accommo­ date “artistic license.”

3. Make a set during one sitting. Repetition yields effi­ciency. On the wheel, most functional pottery can be thrown within a few minutes of starting to form the clay. Making a set of six cups within one working ses­sion should be possible. The average time to throw a small cup should be one to two minutes. If you throw one or two cups but wait until later in the day or the following week to finish, they’ll be inconsistent.

4. Make a series of the same form. Series also qualify as sets. A series can denote a slight but intentional change in each piece. The evolution can be in shape, scale, glaze, or pattern. A wheel-thrown cylinder shape offers an excellent example of one way to think about series. Starting from 112-pound (227-g) balls of clay, you can form small cylinders to make teacups, coffee cups, and small vases. The same procedures can be applied to creating a set or series of nesting bowls, just by increas­ ing the amount of clay used to make the same bowl shape in varying sizes.

5. Experiment with glaze techniques. It is often easier to try various glaze patterns or glaze colors on similar forms. Working from a standard object (similar pots or sculpture pieces in a set or series), apply glazes in numerous patterns. For example, glaze one piece blue, another yellow, the next green, and so on. It is usually most productive to choose one type of form and work out the glazing techniques either through repetition or slight variations.

6. Stack pots in a set to best use kiln space. Because all of the pieces in the set will be the same, or at least have some common design elements, stacking the pots in a bisque or a glaze kiln allows the wares to fit in limited kiln space more efficiently. In the bisque kiln, save space by placing nesting bowls within each other. In the glaze kiln, place cylinder sets very
close to each other, using every part of the kiln shelf. Denser stacking of the bisque and glaze kilns trans­ lates into more pots per cubic foot of kiln space, greatly reducing fuel costs.

Always turn out more pieces than required to complete a set Making additional pieces will ensure at least some will come through the pottery making process without defects. It will also
allow for choosing the best pieces to form the set. The extra time and effort required to produce the work is nothing com· pored with the disappointment of not being able to assemble a complete sel.